Where To See Caravaggio’s Paintings In Rome

Born Michelangelo Merisi in 1571 in the small town of Caravaggio near Milan, Caravaggio is one of Italy’s most important and influential painters. Caravaggio arrived in Rome in his early 20s, in extreme poverty, but was soon noticed by rich patrons and commissioned to paint works for the city’s churches and chapels. Characterized by a dramatic use of chiaroscuro, his paintings portrayed religious scenes in a realistic manner, a bold departure from the artists who had come before him. He even used real-life acquaintances, including prostitutes and love interests, as models for his works.

Caravaggio’s personal life was equally controversial. Known for his love of drinking and gambling, he was often involved in brawls, and in 1606 he killed a man during a street fight and was forced to flee Rome. During exile, he continued to work on commissions in Naples, Malta, and Sicily until news of his death reached Rome in 1610. The exact circumstances of Caravaggio’s death remain a mystery but scholars have put forward multiple theories including syphilis, sepsis, and lead poisoning.

Though his time in the Eternal City was brief, Caravaggio worked at great speed and created a number of paintings that remain in situ, still hanging in the churches for which they were originally commissioned. Other works were purchased by popes and nobles and now hang in the city’s galleries and museums. So, if you’re an art appreciator heading to the Eternal City, these nine places should be on your list. 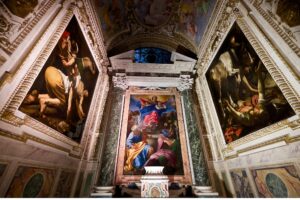 This church in Piazza del Popolo houses two paintings by Caravaggio: the Crucifixion of Saint Peter and the Conversion of Saint Paul. Like many church artworks in Italy, you’ll need to slot a coin into a machine to light up the paintings (and contribute towards the upkeep of the church). Though, originally, they would have only been seen by candlelight. As well as examining the unusual positions the saints are portrayed in, take a moment to consider how Caravaggio used perspective to compensate for the position of the canvases, on the side walls of the chapel – both paintings retain their artistic appeal, even when viewed from such a wide angle. 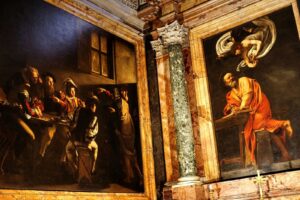 Three Caravaggio paintings hang in the church of San Luigi dei Francesi, near Piazza Navona, all depicting moments in the life of Saint Matthew. The Calling of St. Matthew shows Christ appearing in front of his soon-to-be disciple for the first time and is set in a dimly lit space which could be an office or a tavern, depending on the eye of the beholder. In the Inspiration of St. Matthew, an angel looms over the saint, guiding him in his works. The final piece, the Martyrdom of St. Matthew, shows a sprawl of figures involved in the saint’s death. 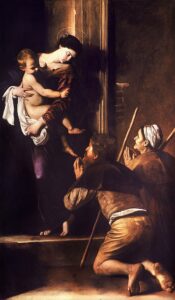 When Caravaggio unveiled his Madonna of Loreto in 1606, church officials were shocked by his interpretation of the Virgin Mary. Standing barefoot in her crumbling doorway, this wasn’t the usual representation of purity and Christianity – and nor were the two dirty pilgrims at her feet. 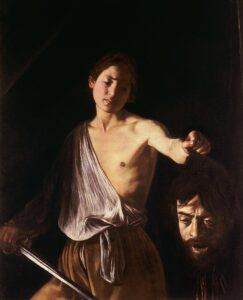 With seven Caravaggio paintings gracing the walls, Galleria Borghese holds Rome’s largest collection of works by the Baroque master. Boy with a Basket of Fruit (thought to be a self-portrait), St. Jerome, Sick Bacchus, John the Baptist, Portrait of Pope Paul V, Madonna of the Palafrenieri, and David with the Head of Goliath, in which Caravaggio used his own image in the face of the decapitated giant. Tickets by advance booking only. 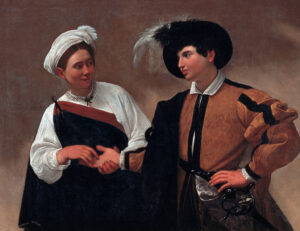 Two of Caravaggio’s works can be seen in the Capitoline Museums, alongside other masterpieces from by Titian, Tintoretto, and Rubens. Look closely at The Fortune Teller and you’ll see the girl reading the boy’s palm is also slipping the ring off his finger. In John the Baptist a youthful John is playfully reclining, one arm around a ram’s neck. 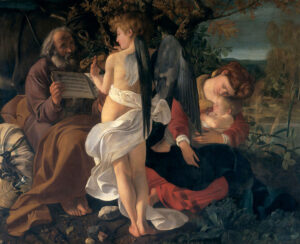 Rest on the Flight Into Egypt

John the Baptist was a popular subject with Caravaggio who painted the character numerous times, including the copy now located in the Doria Pamphiji Gallery on Via del Corso. The Penitent Magdalene and Rest on the Flight Into Egypt are also housed here. 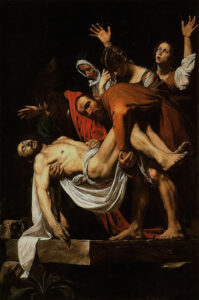 The Entombment of Christ was originally painted for the Santa Maria in Vallicella church in Rome’s historic center but now sits in the Vatican Museums across town. The scene shows Christ’s followers in various stages of mourning as they place his lifeless body in his tomb. 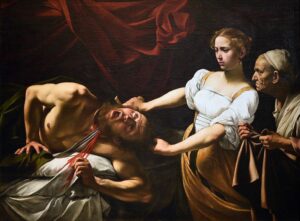 Caravaggio’s gory Judith Beheading Holofernes has inspired numerous artists including Francisco de Goya and Artemisia Gentileschi, who both created their own versions of the scene. Caravaggio’s version sits in Palazzo Barberini alongside his Narcissus and St. Francis in Meditation. 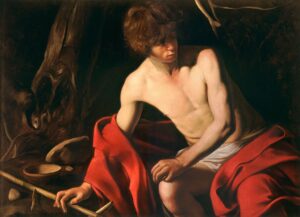 Another depiction of John the Baptist hangs in Palazzo Corsini in the Trastevere neighborhood. This version shows John in a moment of repose, stripped of his usual identifying symbols and with the sunburnt hands and neck of a laborer.

Where to stay to see Caravaggio in Rome

Our Spanish Steps Terrace apartment is the perfect spot to discover all the paintings of Caravaggio in Rome!