Weather In Rome: What To Expect Each Month

Are you wondering what the weather is like in Rome, Italy? If you’re checking the forecast to figure out the best month to visit Rome, look no further. As a Mediterranean capital with mild weather, the city has a lot to offer year round.

High season in Rome coincides with warmer weather and runs from Easter to mid-September – with peak tourism during the summer months. The city also enjoys a shoulder season, from March-April and again from October-November. Apart from the Christmas holidays and New Year’s celebrations (which last until La Befana on January 6th) December, January and February are considered low season and the city is generally less crowded with tourists.

Read on to find out when’s best to organize your perfect vacation! 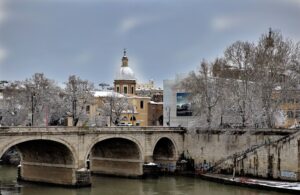 Temperatures in January range from 3-12°C (37-54°F) so packing warm layers is essential. Even though it can be chilly, you’ll often find blue skies and sunshine meaning you’ll still be able to explore the city with ease. The first week of the year can be pretty crowded because the Christmas holidays extend until La Befana on January 6th, a national holiday that marks the Epiphany. Winter sales start on January 7th but soon after the crowds die down and life returns to normal.

Officially low season, February means no crowds and no lines for most of the main attractions. Winter in Rome is mild, with an average temperature is 9°C (48°F), though rain is likely about half the days of the month – so pack waterproof clothing or an umbrella. It doesn’t often snow in Rome but in February 2018 the city had its first snowfall in six years. (Before that, it last snowed in February 2012!)

The tourist crowds are just around the corner, but cooler temps mean the streets are still pretty quiet. March is a great month for a peaceful city break, but Rome is known for being very rainy this time of year. Indoor activities like museums and art galleries are a safe bet whereas outdoor sites, such as the Colosseum, can be soggy if you visit during a shower, so be sure to check local forecasts. 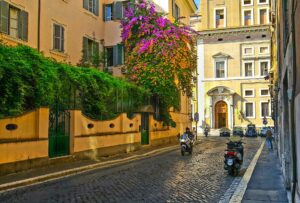 Rome reawakens in April with milder weather bringing new flowers and new visitors to the city. Temps vary widely from 9-19°C (48-66°F) so warm layers are still a must, particularly during the chilly nights. There’s lots of events happening this time of year, including Rome’s birthday on the 21st, so sights can be busy at peak times, especially if Easter happens to fall in April too.

Spring is officially here. Look out for wisteria and bougainvillea in bloom all around the city and enjoy warm sunshine on your back. Pack sunglasses for the day and a warm jacket for nighttime. May 1st is a national holiday in Italy and some businesses, including museums and attraction, may be closed.

Summer solstice on June 21st puts long, sunny days back on the agenda. Along with the beautiful weather, there are, of course, more crowds and longer lines. The summer calendar of events, which includes concerts and open-air cinemas, also kicks off so this month is really buzzing. June is a great month to enjoy Rome’s many rooftop restaurants or a day trip to the nearby beaches. 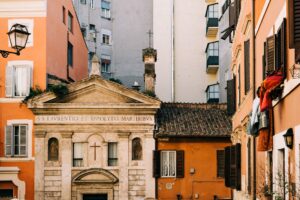 High season is at its peak in July and the city is hot! The average temperature might be 26°C (78°F) but it can reach 30°C (86°F) or even higher. Pack shorts, sandals, and other lightweight clothing but don’t forget knees and shoulders must be covered when visiting churches and other religious sites.

In August temperatures can reach 37 °C (98°F) for days on end. Many locals head to the beach for respite, so parts of the city can seem semideserted with some restaurants and small businesses closed for the entire month. Consider avoiding the heat during the middle of the day (happily, all Treasure Rome apartments have air conditioning) and be sure to keep hydrated.

One of the best times to visit Rome, September is still very warm with temps between 15-27°C (59-80°F) but minus the scorching heat of August. You probably won’t need a jacket most of the time either, except perhaps on the occasional crisp evening. Tourist numbers are decreasing but September still counts as high season so booking skip-the-line tickets in advance can really save precious time. 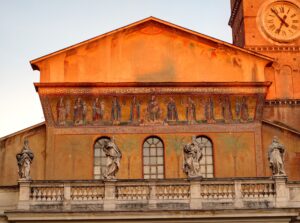 The beginning of the fall season is lovely and temperate so you won’t need to pack those winter layers just yet – a jacket and jumper is usually all you need to keep out the chill. Plan to visit some of Rome’s best viewpoints to savor this time of year’s beautiful, colorful sunsets.

The mercury drops to an average of 13°C or 55°F in November, and nights, in particular, can be cold. Storms can gather quickly and seemingly out of nowhere so it pays to be prepared for rain. Low season is on its way, so the city is easily navigable without too many crowds.

Winter in Rome can actually be a very cozy time of year. There’s definitely a chill in the air, with temperatures ranging from 4-12°C (39-54°F) but, as the city gears up for Christmas, the atmosphere is unmistakably festive. Italy’s biggest Christmas markets are in the north so Rome isn’t as awash with tourists as you might think!